The Glen Tay Block Race is as old as the hills!

The race was first run on Thursday, October 31, 1907. Local Perth Collegiate Institute athlete, Ed Code, won in a time of 52 minutes 43 seconds. The race was contested as a Thanksgiving day event. Yes, Thanksgiving was held on Thursday 31 October that year. It continued as a Thanksgiving day event in subsequent years. That first year, the contestants ran an out-and-back 8 mile race. Thereafter, the course was changed to the Glen Tay block, more or less as we know it today. This race, and many others in Canada, were inspired by Canadian Billy Sherring‘s marathon win the previous year at the 1906 Olympic games in Athens, Greece. For more about the first race, read this pre-race article in the Perth Courier newspaper.

The post-race report is a fun read. Considering their footwear, their heavy cotton running attire, the dirt roads, and the lack of preparation, it was remarkable athletic performance to run a 4 minute per kilometre pace! Here’s an excerpt from the Courier’s post-race article:

The much-talked-about road rce on the morning of Thanksgiving Day, under the auspices of Messrs. Rogers & Nicholl local hardware merchants, was certainly a great success in every respect, and caused intense interest in town and also through the country to Manion. The race was only announced during the previous week but in the meantime many young men trained hard for the big event.

Centennial Project: The modern edition of the race was founded in 1967 by Perth educator and coach Tom Graham as a Centennial year project. It was sponsored by Perth merchants Bill and Jack Wilson with encouragement from sportsmen Rusty White and Peter Code. Other than 1969 and 1970, it has been run every year since on the last Thursday in August. It is a summer classic that is not to be missed. 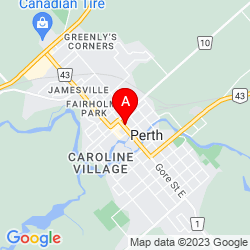